Nearly 70 Years of South Of The Border Fun 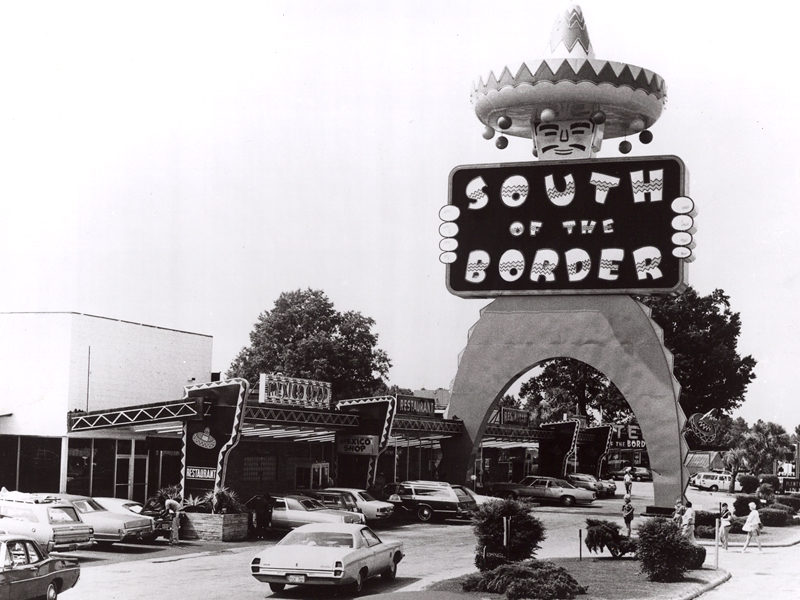 Nearly 70 Years of South Of The Border Fun

This year South of the Border, America’s favorite roadside attraction located near Dillon South Carolina along Interstate 95 at the North Carolina and South Carolina border, closes in on its 70th year of operation and our plans are to get bigger and better than ever before. Pedro has seen a lot of changes in the world and a lot of changes here at South of the Border over the years, and Pedro has many new projects and renovations that have been recently completed

South of the Border began as a 600 square foot stand selling beer to thirsty patrons from dry counties north of the border in North Carolina and has developed into a 300 acre complex with such diverse features as a motel and campground, six restaurants, a theme park, mini-golf, fireworks store, gas stations and more than a dozen gift shops with everything from Mexican jumping beans to antiques. In the beginning Mr. Alan Schafer worked the stand by himself and now SOTB is run by the third generation of the Schafer family and hundreds of employees, making it the biggest employer in Dillon County, S.C.

The people used to come to in a few at a time in American made Chevys and Fords traveling along Highway 301. Now Pedro greets millions of cars, made all over the world, traveling from New York to Florida on Interstate 95, and now some of those cars even run off of electricity. And now, people can travel on jet planes from one side of the U.S. in only a few hours instead of having to drive for days. Speaking of traveling, Pedro has even seen people take voyages in rocket ships from the Earth to the Moon and live in space stations circling high above our planet.

Communicating has changed immensely in the last 60 years. Back in 1950, telephones weighed a few pounds and their use was limited by how long the cord that was attached to it would reach. The sound traveled over wires stretched from coast to coast, and operators transferred calls by switching plugs to make the connection. Now the phones weigh only a few ounces and are wireless so that you can carry them with you on your trip to give Pedro a call if you need to reserve a room at the South of the Border Motor Inn. The cell phone signals now bounce off satellites orbiting the earth and can reach nearly any point on the planet. The satellites themselves are another creation that has happened in the last 60 years, with Russian putting the Sputnik 1 in orbit in 1957. Floating high above the earth and circling the globe, they now carry every type of communication one can image. Television, phone calls, global positioning signals (GPS), surveillance cameras and outer space research are all carried by satellites today. GPS has become a vital part of modern communication and travel. The satellites send signals to small devices, cars, and cell phones that are equipped to guide people to their destination with on-board maps that are displayed on the screen or by a voice that speaks to you.

The computer might be the biggest change in world since South of the Border opened all those many years ago, followed closely by the invention of the internet. In the 1960’s computers were so large that each one would take up space equivalent to the average living room just to do the simplest of calculations. Now smart cell phones that fit in the palm of your hand are able to pack the power of dozens of those computers, and they can connect to the internet so you can surf the web while away from home. The internet has become ingrained in everyday life, with people doing their shopping, paying bills, learning, playing games, watching movies and using social media sites to connect with their friends who might live far away.

We know there are so many more events, inventions and important happenings in the last nearly 70 years and we invite you to share your memories of anything that was important to you and your family, or simply tell us your favorite memory of South of the Border and the changes you have seen to our complex here in Dillon, SC.

Discover more news, articles, and special offers from Pedro at South of the Border

As some of you know, Good Ole Blenheim Ginger Ale is made right here on the grounds of South of the Border, America’s Favorite Roadside

At South of the Border, America’s Favorite Roadside Attraction, in Dillon South Carolina there are a lot of larger than life things to see..

5
Nearly 70 Years of South Of The Border Fun

This year South of the Border, America’s favorite roadside attraction located near Dillon South Carolina along Interstate 95 at the North

BACK TO PEDRO'S BLOG