One of America's Favorite Roadside Attractions 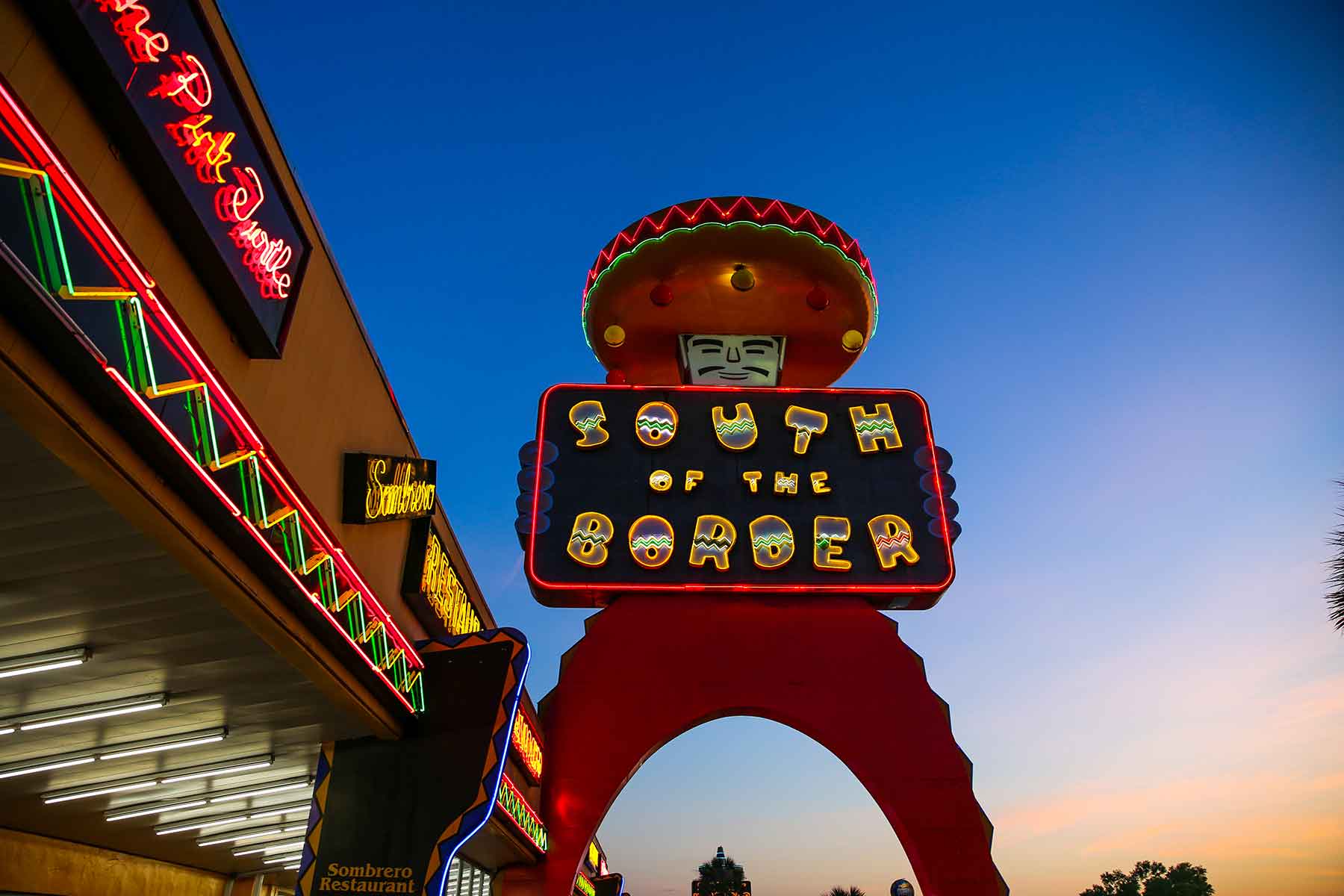 One of America's Favorite Roadside Attractions

South of the Border Tourist Attraction in Hamer, SC is one of America’s favorite roadside attractions. For 60 years our Mexican themed attractions have tempted travelers along Interstate 95 to stop in for a visit. Our 100 foot tall statue of our mascot Pedro sports a huge sombrero, and you can find your own sombrero in one of many South of the Border gift shops. You can grab some quick Tex-Mex food like tamales and nachos at our 24-hour Hot Tamale Diner. You can also get a cold beer and some spicy Mexican favorites like burritos with re-fried beans and rice at The Sombrero Restaurant.

The South of the Border theme came about when the founder Alan Shafer took a trip to Mexico to buy trinkets for the gift shop. He helped two young Mexican men immigrate to the U.S. and gave them jobs. One of them was nicknamed Pedro, and pretty soon everyone just started calling each other Pedro and a tradition was born.

It didn’t matter what race or nationality anyone was, they all called each other this nickname. The South of the Border theme evolved from this inside joke among employees, and Mr. Shafer’s desire to help two young men come to America for a better life.

One of the most popular holidays of the year is Cinco de Mayo. Many people are under the impression that’s it’s a day to celebrate Mexican Independence. However, Mexican Independence day is actually September 16th. That’s when Roman Catholic priest Miguel Hildago encouraged his congregation to revolt against Spanish rule. Cinco de Mayo began in Mexican-American towns in California and the Southwest United States, and in the Mexican state of Puebla where it’s known as El Día de la Batalla de Puebla, or The Day of the Battle of Puebla.

Cinco de Mayo is a celebration that grew out of the American’s appreciation of the Mexican’s help in turning back the French Army from helping Confederate soldiers in the American Civil War. On May 5th, 1862 the Mexican Army had a surprising victory over the French forces in Puebla.

Over the years it has turned into a celebration of Mexican culture and heritage. In 2005, Congress passed a resolution to have the President declare Cinco de Mayo a day of appreciation with ceremonies and activities about the Mexican and Latino culture. Everyone at South of the Border shares the respect of the Mexican culture, while also having a bit of fun with theme. Our founders, workers, fans and hopefully all our visitors understand the wonderful and incredible contributions our neighbors to the south have given the world. So everyday at South of the Border is like Cinco de Mayo for us.

Discover more news, articles, and special offers from Pedro at South of the Border

As some of you know, Good Ole Blenheim Ginger Ale is made right here on the grounds of South of the Border, America’s Favorite Roadside

At South of the Border, America’s Favorite Roadside Attraction, in Dillon South Carolina there are a lot of larger than life things to see..

5
Nearly 70 Years of South Of The Border Fun

This year South of the Border, America’s favorite roadside attraction located near Dillon South Carolina along Interstate 95 at the North

BACK TO PEDRO'S BLOG